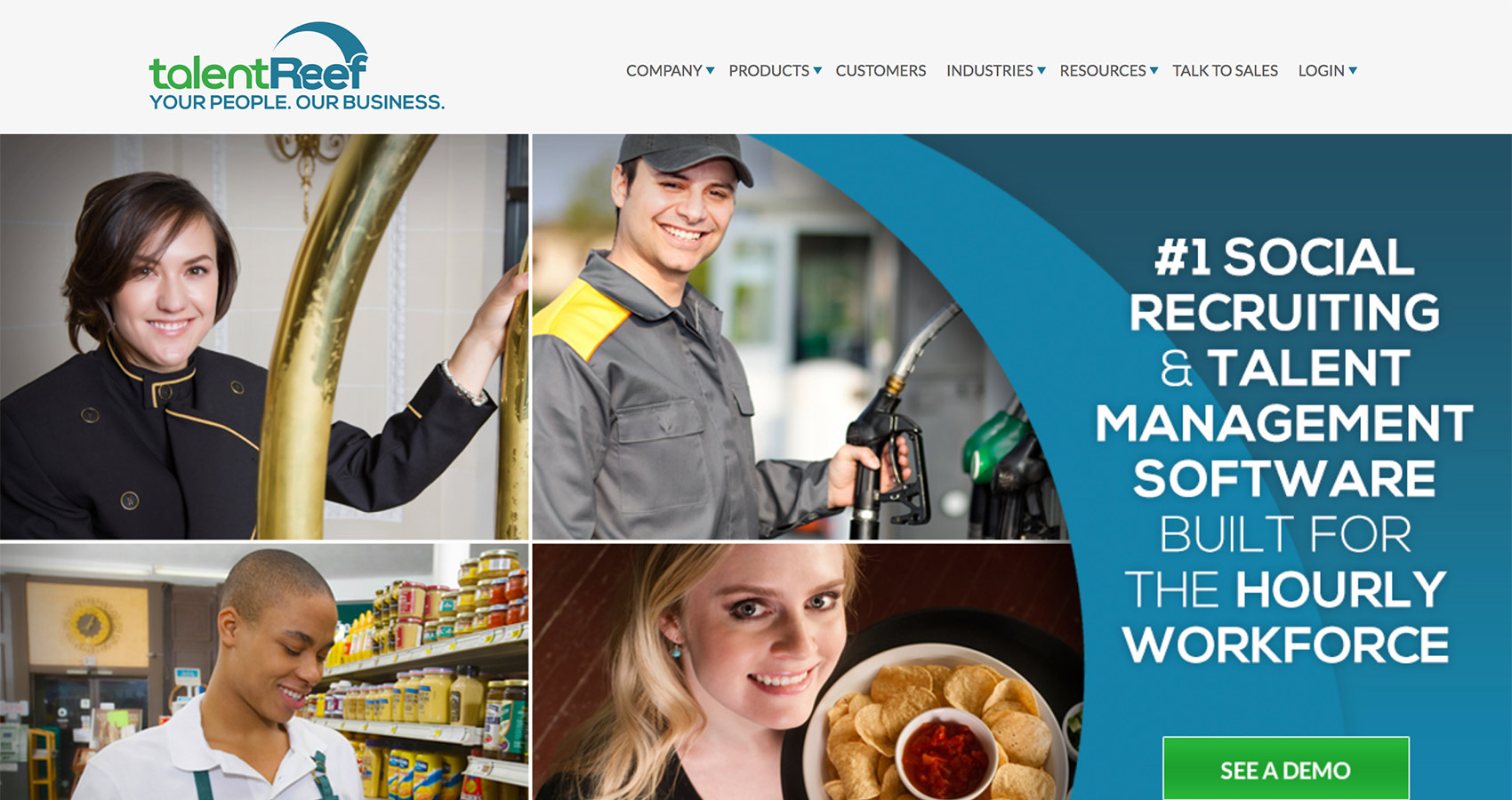 talentReef is the No. 1 provider for social recruiting and talent management systems, specifically built for the hourly workforce. Funded by VC from silicon valley, but with a main office in Denver, they were torn between choosing an agency partner in CA or CO. After initial discussions that surpassed all other agencies they interviewed, the decision was made to choose NEWMEDIA as their Denver digital marketing agency to handle the full-service branding, website design and development project from end to end. As the market leader with more than 50,000 sites under contract, including the world’s best known and best run brands, the company streamlines how fast-paced operators find, hire, train, and manage their most valuable asset—talent. The company’s mobile-optimized HR platform (social recruiting, ATS, onboarding, training and development, performance management, and analytics) is transforming the way Millennials are connecting on-demand with employers globally.

The project was challenging in the sense that the NEWMEDIA team had to bring together two existing companies, JobApp and talentReef, to form a new, single entity, talentReef, and brand them for the web. NEWMEDIA’s Denver web design team worked diligently with the CEOs of each organization to understand the culture and message they intended for their users through the combination of both companies’ visions. One of the first challenges was determining the overall brand feel, color scheme, logo, and tagline for the new entity. This step had to happen before the website redesign, and it took multiple iterations until we achieved the final result. We combined aspects of each company into the final version of the logo and believe that the crisp, clean elements of the logo are appealing to existing and new users. Our team created versions to use for building signage, trade show booths, business cards and other printed materials, and of course, the website and emails.

Below are two screenshots of the two separate websites before the NEWMEDIA team started work on rebranding and website design.

In order to determine the appropriate branding and messaging for the website, NEWMEDIA interviewed multiple existing clients and employees of JobApp and talentReef to gain an understanding of the platform of services and products offered by both companies. We also examined how the companies’ customers used the platforms and products, and how they expected to interact with them moving forward. This was invaluable information as we assisted the client in developing the content—both the actual on-page verbiage and the overall sitemap and information architecture as well as the definitive messaging for the site. As part of the creative process, we collaborated with the client not only to determine the design, layout, and navigation of each section of the site, but also to determine the content that would be presented on each frame. It took several revisions of each section of the site to pull in the appropriate messaging from both companies into the final version of the website.

Through this process we were able to demonstrate a great deal of proven tools that are useful when merging two companies into one. The NEWMEDIA team demonstrated that leveraging input from current site users and employees from both companies aids us in determining and developing the overall messaging for the site efficiently and effectively. In this particular case, it was important to keep and portray both companies’ cultures in the redesign and development of the new site. Neither party wanted current users to be unsure of the products that were being offered moving forward, so clean and concise messaging was imperative.

The talentReef rebrand and site redesign were both key factors to the success of this project and needed to be nailed down before proceeding on all phases of development. This meant some of the branding and design time rolled into the development time. On top of this challenge, we also learned that talentReef needed the site delivered earlier than planned in order to showcase it for an upcoming stakeholder meeting and presentation. This gave us approximately nine days to fully develop the custom front-end of the site, QA the site, train talentReef to add content, and allow them two full days to populate the site with content—that is an incredibly tight deadline for a fully custom website.

The images below are the updated talentReef website after NEWMEDIA helped with rebranding.

While the condensed timeline did present some challenges, we were able to quickly adjust our development resources to ensure the site would be ready for their big presentation. Our development process allowed the majority of the site back-end and functionality to be built out while the design and branding process continued with the talentReef team. Once we had final approval from the client on the site designs, we were able to move full steam ahead on developing the front-end of the site to look and feel like the approved designs.

We scaled up to a team of three NEWMEDIA front-end developers (Tanner Ferguson, Bryon Urbanec, and Ryan Blyth) who were fully dedicated to theming, reviewing, training, and deploying the site. The site was designed to be fully mobile-responsive, meaning we needed to create both a mobile and desktop version. Given the tight timeline, we knew it would not be possible to complete both the mobile and desktop versions at the same time; however, the talentReef team only needed the desktop version for their presentation with the idea the mobile version could be developed and deployed shortly after the presentation deadline.

In responsive design and development, creating a desktop version first and then the mobile version is not an ideal scenario. At NEWMEDIA, we typically use a mobile-first approach, which means we design and develop the mobile pieces first and then layer the desktop differences on top. Since this was not an option for this particular project, the front-end team created a strategy that would deliver the desktop version on time while still being able to create a great mobile version of the site. The development team worked closely with each other to ensure all the work was accounted for, divvied up, and progressing at a rate that allowed us to complete the entire desktop version before the deadline.

It was a great challenge, but we were able to scale our team, collaborate, and complete the desktop version of the site on time as well as seamlessly incorporate the mobile version shortly after. talentReef was able to get all of their content into the site, give a great presentation, and have a fully responsive site. The NEWMEDIA team was able to refine our development process, pull together as a team, and deliver a great site.

Have a similar project? Contact us for a proposal today! 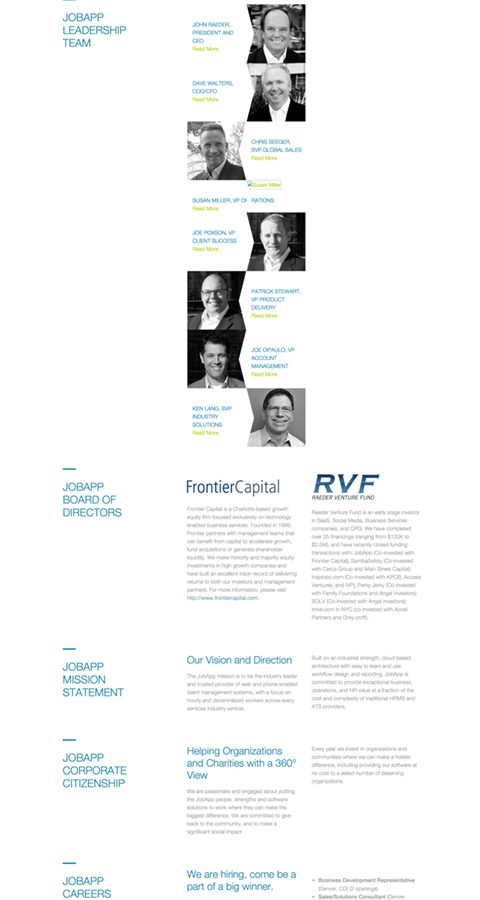 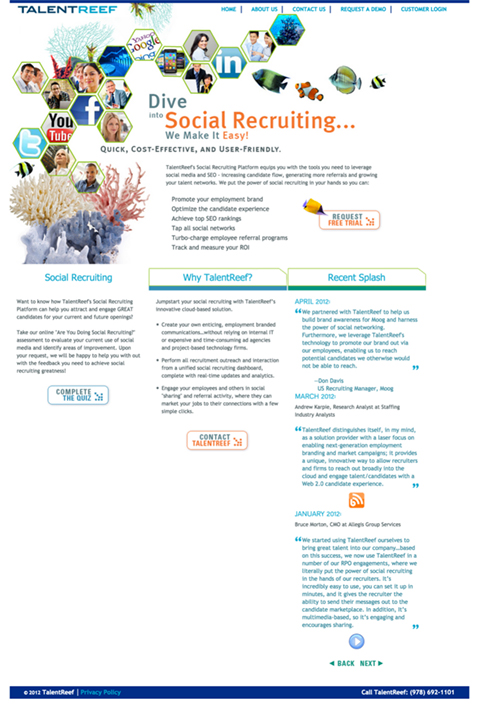 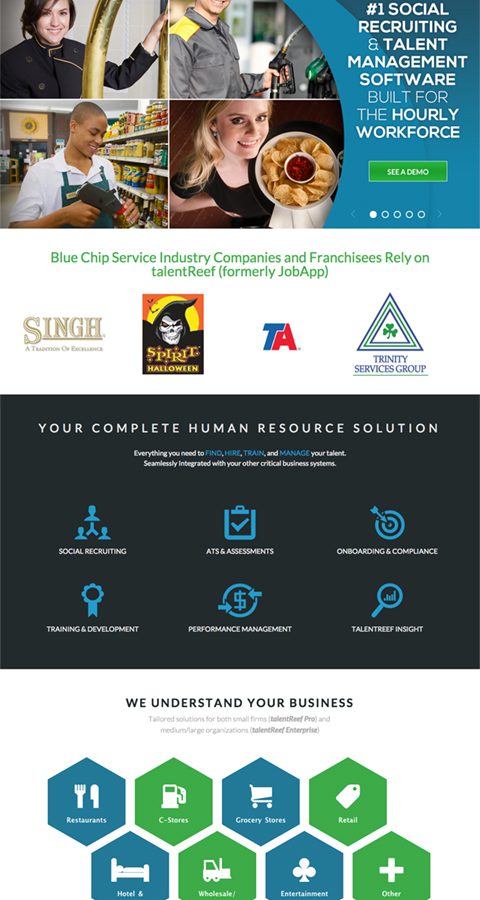